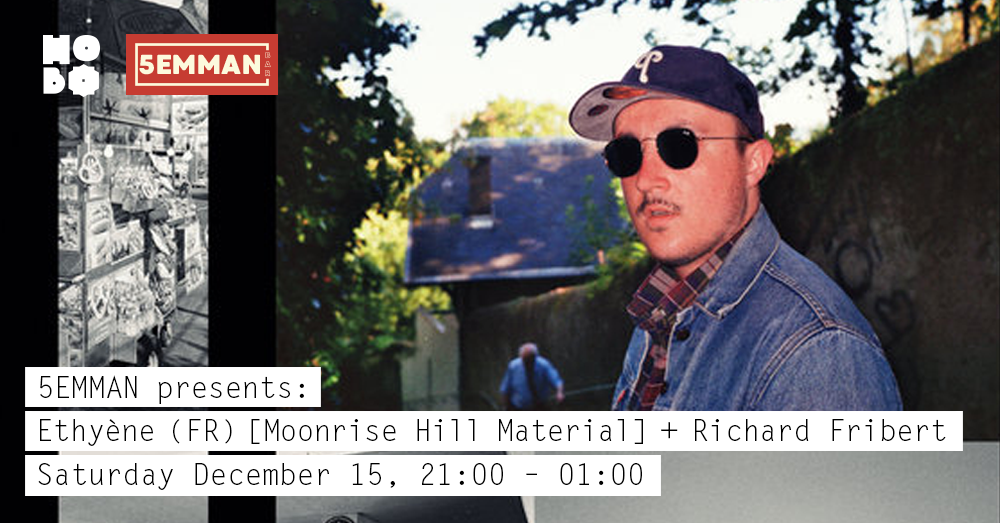 Ethyène is a producer, Lyon-based DJ, and label manager delivering a House Music finding its roots in the sounds of Detroit, Chicago, and Manchester. Born in 1993, Ethyène started producing at the age of 16 and became resident DJ for the hip-hop collective Artjacking France the same year.
Shaped by digging the whole different sounds of black music, his productions reflect a mature, well influenced but always very personal approach of House Music.
The young producer’s career took on a new lease of life with the co-founding of the record label Moonrise Hill Material in 2015 alongside Folamour, Kaffe Crème & St Paul and a bunch of new releases on some cool imprints such as Roots For Bloom, Kolour LTD, Better Listen and more …
Working Class Anthems, his 6th solo EP in 2 years complete a whole series of grooves sampling a high range of music genres from Library to 90’s R&B witnessing Ethyène’s daily digging & producing habits.
In 2017, after having one his EP charted in the top 10 best deep house release of the year by Juno, Ethyène decided to see further for 2018 and create a new record label to be able to release more personal stuff rooted in his French house & hip-hop influences. “Brotherly Love” his debut album is announced on Moonrise Hill Material at the end of the year, be ready!
On Saturday, December 15 it’s time to hit 5emman, with the support of Paris bound Stockholm native Richard Fribert.
https://soundcloud.com/ethyene
https://www.discogs.com/artist/3371905-Ethy%C3%A8ne
Facebook event