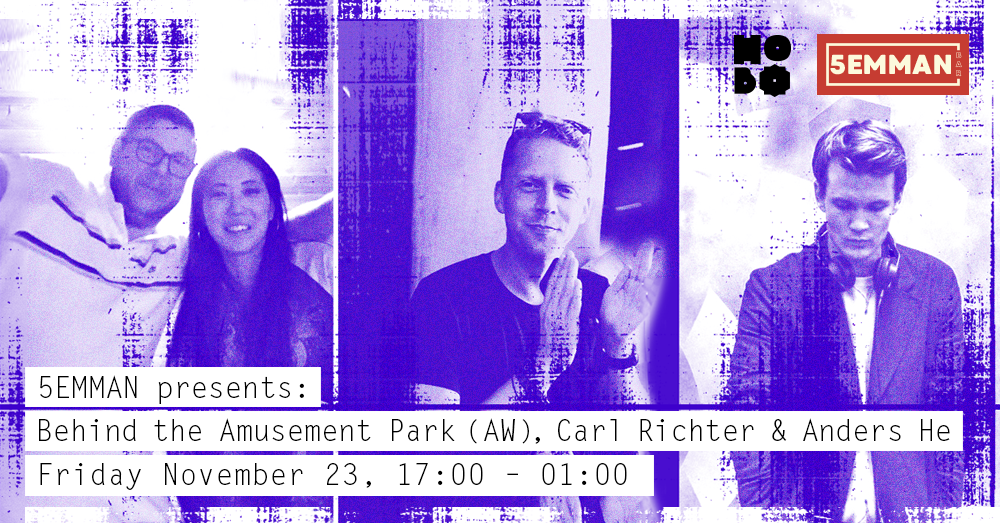 Behind the Amusement Park (AW) Carl Richter & Anders He @ 5emman

Behind the Amusement Park (AW)

Johan Ressle and Helene Havro has been doing parties in Stockholm for quite some time now and they both share the deepest love for the weird and wonderful side of dance music, they are both right now at the big record fair in Utrecht doing the selections for 5emman, so expect nothing but the unexpected madness from these two heavy duty super DJ’s.

Carl describes himself as a house enthusiast and sound explorer. Based in Malmö he’s been throwing clubs both under- and overground for more than 6 years now to be a house enthusiast, both in Crime City and across the bridge in Copenhagen. He’s also one of the brains behind the ever-evolving project H.H.A.S. (Hi-Hat Appreciation Society), the colourful club FAUNA and a frequent edit maker. Expect house in all nuances with an undeniable feeling and a constant groove.
On Friday he’s back for the second time this year to bring the malmö-groove to the 5emman dance floor, this time with backed up by:

Born and bred in Mexico City, with Swedish roots, this DJ and producer have been steadily making a wave in the Stockholm DJ scene! With his Gone Missing Radio event, 2018 has been an exciting year. Playing all over Stockholm as well as shows in Malmö and Gothenburg. His selections are everything from 90s Boom Bap to house, disco and Latin. Playing back to back with an old friend and Malmö House champ Carl Richter, he is bound to put a dip in your hip.