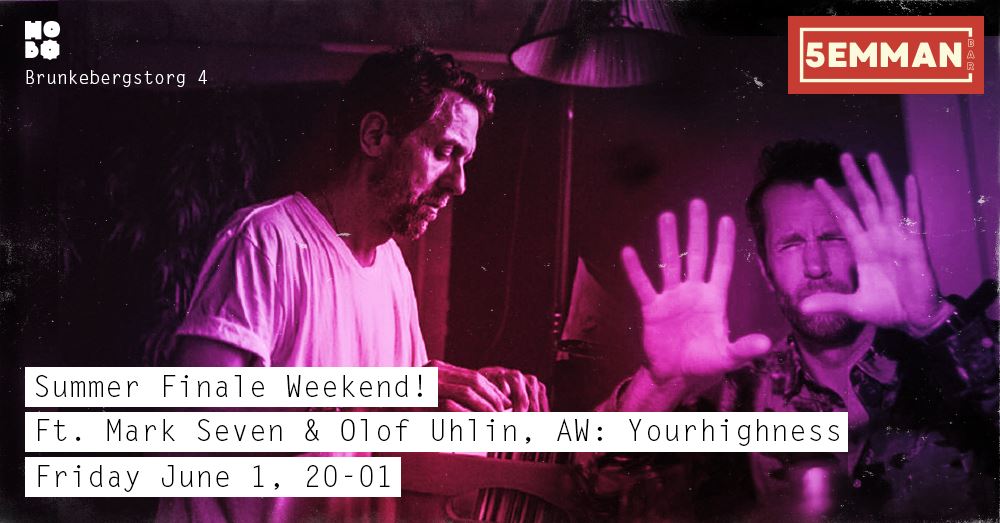 The summer finale weekend has come upon us, and we want to end a successful winter and spring season @ 5emman with two legends:

MARK SEVEN
Based in Stockholm since the late 1990s, British-born Mark Seven began his obsession with the dance on the legendary dancefloors of London clubland. As Acid House took root in the capital Mark was a regular at the similarly hallowed Future and Shoom and started organizing his own events. His passion for discovery led him to journey across the U.S. and Europe to source vinyl and has resulted in his own store, Juswax. In Stockholm Mark set up the Black Lodge all-nighters, mix-tapes from which helped to alert the outside world to his knowledge and ability.

Producing since 1991 and running labels since 1992, Mark`s current project, Parkway, is inspired by the sounds he first fell in love with: the explosion of creativity that occurred post-Disco when electronics became more affordable and the music moved back underground. Names like Paul Simpson, Winston Jones and Boyd Jarvis, Emergency, Streetwise, and Easy Street. Records with Herb “The Pump” Powers etched in the runout and segues of exclusive edits/remixes of unknown-to-all-but-a-few Black music releases of the 1980s. Unsung tracks that fed into a sound that became House. A history, that without people like Mark, would have already been forgotten.

OLOF UHLIN
With a DJ background spanning over 20 years, ranging from northern soul to house through disco and techno, Olof Uhlin is one of the most technically skilled and diverse DJs in the Stockholm dance music community. It doesn’t matter if he plays strictly genuine ’87 house in a red light basement or blends techno with disco on a Croatian beach. Olof masters it all. He’s a staple of the Stockholm club scene and considered a bit of a DJ’s DJ amongst those in the know. Expect to hear the unexpected.

We want to thank everyone DJs, artists and heads that have come by and literally danced their ass off! We’re with more of the good vibes this fall, until then: