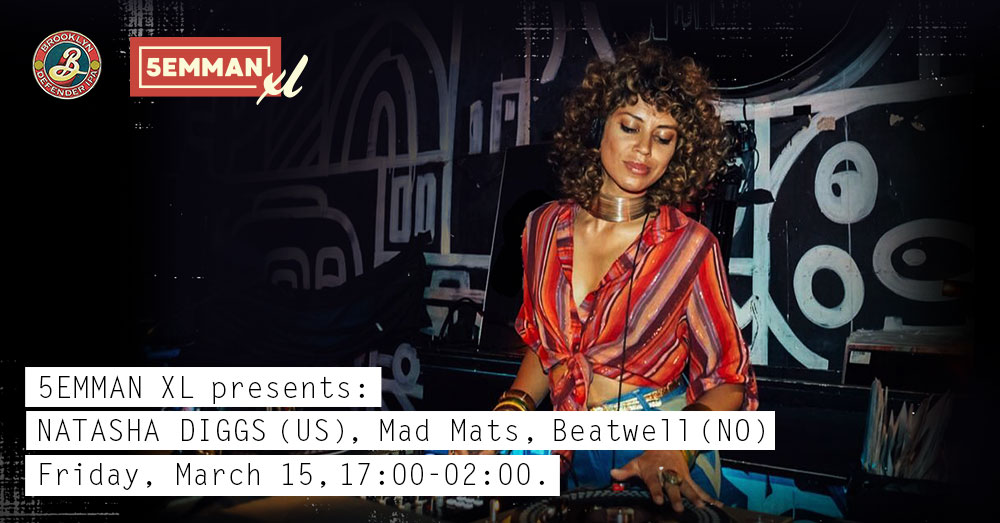 Enter 5emman XL; our new monthly events with everything you know and love with that extra cherry on top.

The drinks will taste better, the atmosphere will be wilder, the sound will be tuned finer and the artists, that will be flown in from all corners of the world, will contribute to the new, elevated HOBO experience that is 5emman XL. Join us and dive head first into the warm world of house, funk and disco of the soulful kind in an intimate environment where the club and the lounge experience meet and have a wonderful lovechild.

Best of all? Admission is always free. Make sure to catch the premiere on February 16. Come early and leave late.

Presenting our selectors of the evening:

NATASHA DIGGS has become known as one of the most versatile and well respected DJs in the world making a career out of sharing her deep knowledge of music and skills as a mixologist to crowds across the globe in cities such as New York, Tokyo, Berlin, Prague, Sydney and Beijing.

Her broad spanning taste in music allows her to be equally comfortable playing underground loft parties as she is massive events such as Central Park Summerstage for thousands earning her respect in the world of music heads and a solid reputation amongst her clientele.

‘When not traversing the globe, Natasha can be found holding down the decks at her weekly NYC residency “Soul in the Horn/’ the city’s premiere dance party and live music showcase celebrating horn-infused music from around the globe while bringing together the best NYC talent in one room. In addition, she has appeared on Fuse TV’s ”Crate Diggers”, Mixmag Lab, Boiler Room and is featured worldwide on Beats 1 Apple Music playing alongside Q-tip for their weekly Abstract Radio show.

Label owner and Stockholm local DJ legend Mad Mats have had a career that’s been running strong for over 30 years which has taken him around the world more times than he can remember, and he’s actually hungrier than ever and is spinning every week around the globe. Basically, he really loves his job and especially when he’s free to play a full night with no hands tied. But that said…one of his strong points is that he can rock virtually any type of party. You can have him for your house or techno night, your hip hop/r&b block party or a classic old school retro session with soul, jazz, funk, disco, world music…or everything together of course! Just check his mixes on Soundcloud and experience the diverse sounds of DJ Mad Mats. But maybe best of all, as the dancer, he is it’s not unusual to see him dancing away behind the decks with a big smiley grin on his face when he’s allowed to drop his favourite tunes. Remember…only real DJs know how to flip a b-boy windmill 😉

The love for music has been a constant in his life, always seeking fresh cuts from obscure places, never mainstream but mainstream enough for everyone to dance.
His musical heartrate dates back to the last century, where old school hip-hop, classic disco and birth of electronica all made a lasting impression, and forever inspiring him to think differently and dare to look outside the norm.
The goal is always to create the ultimate atmosphere, for a journey into the rhythms of contemporary electronica, groovy disco and quality house music.
Based in Oslo, beatwell’s extra curricular activities ranging from dance parties to private and exclusive throwdowns.
carl c. welhaven
//
Host & Curator of Caffeine Supreme ™ monthly podcast
itunes podcast: itunes.apple.com/us/podcast/caffe…d1434690829?mt=2