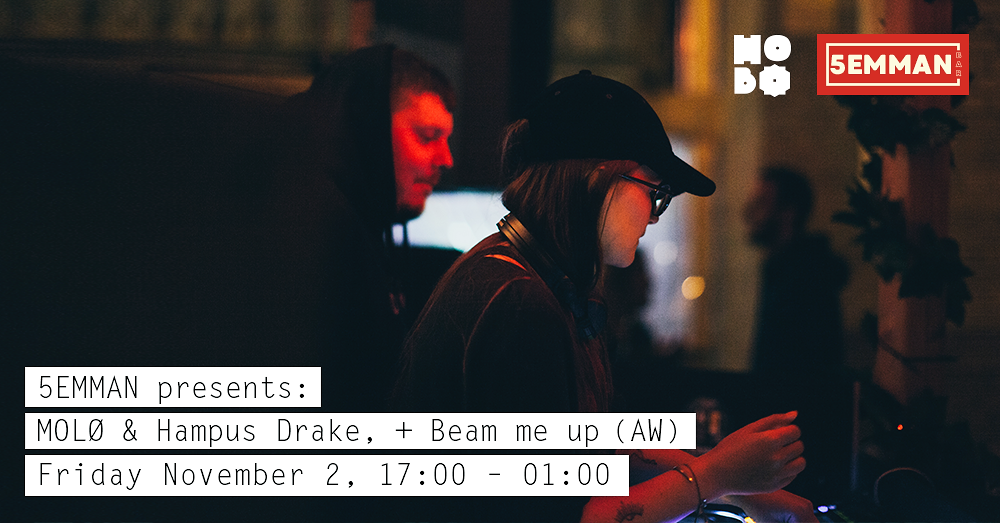 Molø, a dj with a melodic techno affection. This girl has under three years in the scene established herself in Europe, gotten her first productions out in the open, played big stages as well as festivals. A nice start one might say. Her own productions is defined as rhythmic, heavy and beautiful.

She’s the newest family member of Jeremy Olanders Vivrant and she has already played alongside Carl Craig, Be Svendsen, Khen, Sasha, Luciano among others.

This year she was also representing Sweden in Burn Residency 2018. Put her on your list to observe.

On Friday she teams up with Hampus Drake for a serious night of Disco edits, melodic House and other lovable sounds that’ll make your body shake. Get ready to hit 5EMMAN floor..

Having played records in Stockholm, Berlin and Amsterdam since back in 1998, Hampus Drake is a true veteran on the scene in Stockholm.

Founder of now defunct label Norrsken Digitale that released re-edits on limited runs of vinyls, he gained significant notoriety amongst the digger community in the early 2000s.

A label highlight includes the re-edit of classic tracks “Get Ready” by X-Ray Connection and Patrick Cowley’s “Megatron Man”. Both gained support by Bottin (Italian Do It Better / Eskimo),Tomas Barfod (Who Made Who / TomBoy) and Serge Santiago to name a few.

After disappearing into the abyss of the commercial scene for a couple of years, Hampus is back behind the decks with his special blend of old disco vibes and dark techno.

During the summer of 2018, Hampus has been resident DJ at Stockholm’s new open air mega club Kvarteret where he’s set the tone for mutiple high-profile nights playing alongside artists such as Guy Gerber, Jasper James, Barac, and Forest Drive West.

Beam Me Up is back again! A monthly music concept delivered by Disco edit don: Niklas Disco Tech, this time backed up by Sthlm local wax master:

Kim Sandgren
Kim has haunted clubs, parties and bars in Stockholm for decades. He sets a high standard in music such as classic Chicago and New York houses as well as Italo & Disco favorites.

SEE YOU ON THE DANCEFLOOR.
Free admission always.