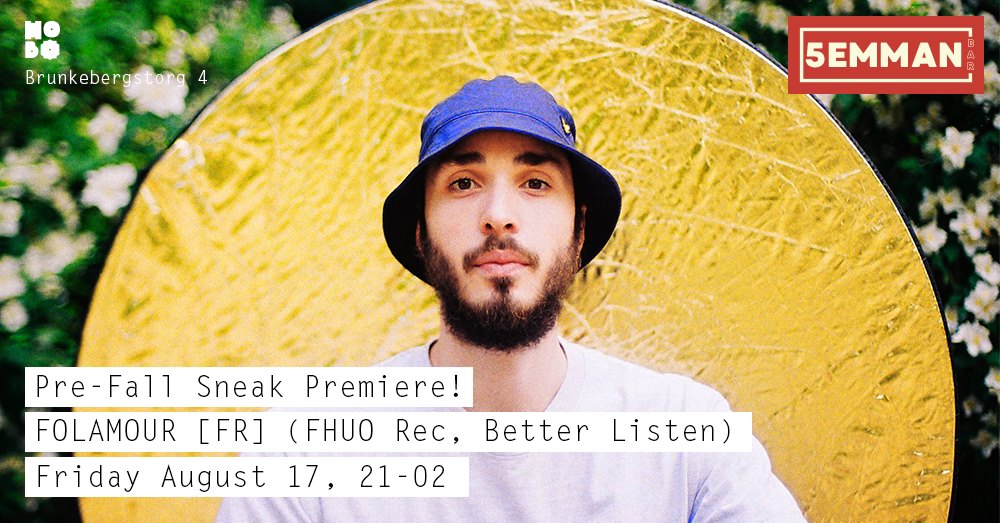 Hey all!
As you might have discovered 5emman is on a summer break atm, but back in full effect in September!

Bruno Boumendil aka Folamour is evolving since years in the field of music. After a childhood spent learning drums, guitar, bass and diverse percussions, Folamour leads projects into few bands, from jazz to pop, working with Lyon’s National Orchestra and Academy of music musicians. Then he became label manager of the great record labels Moonrise Hill Material and FHUO Records, and the amazingly talented DJ & Producer we known. From the local to the international scene, the artist uses lots of aliases and activities to burn most of the coolest dancefloors in France and beyond borders.

Indeed, he always had the will to spread the music he loves through all the possible ways and that led him to found two labels: Moonrise Hill Material and FHUO Records. First, Moonrise Hill Material created in 2015 with Ethyène, Kaffe Crème and St Paul, allowing him to support music from other artists (in particular the founder’s music and friends such as the Better Listen to crew from Washington and the Hommage crew from New York).
Then, Folamour needed more than a label directed with other artists, he wanted more freedom musically, to work with new artists he met on the road, that’s why he founded FHUO Records, his own record label.
With already respectively 7000 records sold for Moonrise Hill Material and 3500 records sold for FHUO Records, we can surely talk about international success for both projects.

But most of all, Bruno is now internationally known behind his DJ & Producer activity behind his name Folamour.

Save the date people…